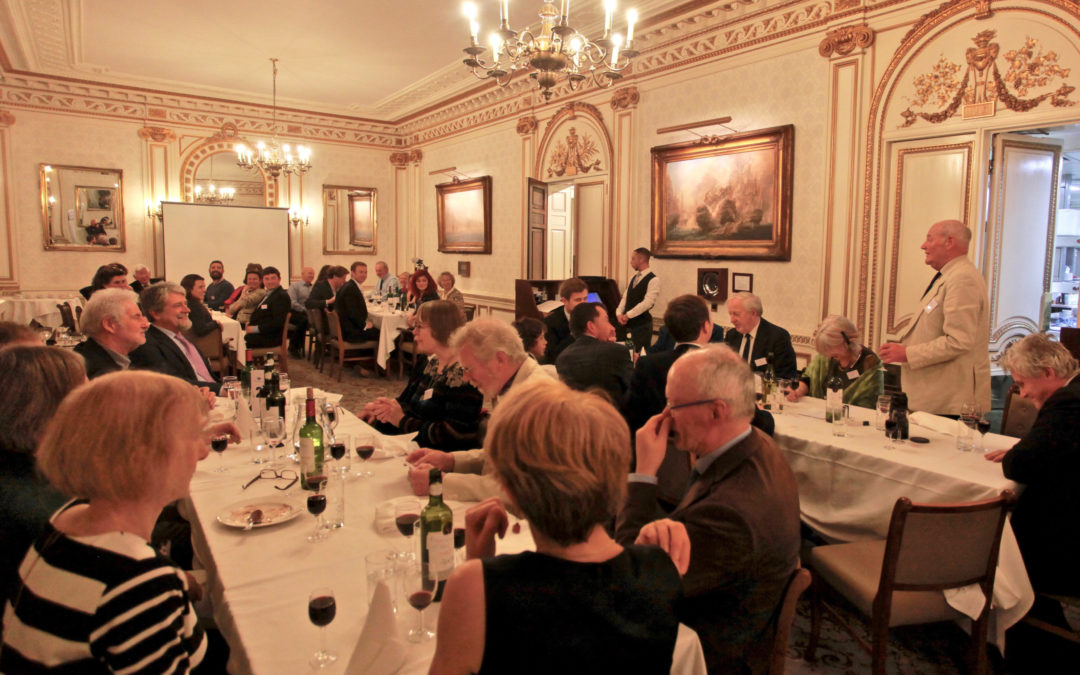 The Naval Club once again provided a splendid venue for our Annual Dinner. Tradition was breached, with a card reader having been installed behind the bar, enabling cashless transactions, but in all other respects we enjoyed the same friendly and attentive reception from staff, with many familiar faces to greet us.

Once settled in the dining room, Alan Thorne said Grace, and we all tucked into a lovely meal (red pepper stuffed with cream cheese as a starter, duck breast main – squash risotto vegetarian option, and rich chocolate mousse with refreshing fruit ripple ice cream) and I think one or two bottles of wine – very reasonably priced – may have been consumed. The arrival of glasses of port marked the point at which we all rose to toast the Queen – Sandy Tyndale-Biscoe doing the honours.
It was great to have members and their crew from a wide range of boats. We welcomed back Kobi and Tsuyumiai (Eleanor D) from New York, and several of us were accompanied by family members that hadn’t been before. I was especially glad to have my wife, Liz, with me and my friends (and crew) Malcolm and Paula. All thoroughly enjoyed the evening.

The main event, of course, was a talk by Tony Curphey (Nicola Deux), with a series of slides illustrating aspects of his solo-circumnavigation. It was a fascinating talk, and stimulated quite a number of questions from members. Whether it was the solitude of the Southern Ocean with its raging storms, the broken boom approaching Cape Horn, or the near disastrous lack of fresh water, I don’t think many of the questions were from people planning the same route.

Finally, to the awards. At the AGM, Members hadapproved a proposal from the Committee to award Tony Curphey Life Honorary Membership of the Association, to mark his circumnavigation and his loyal commitment to promoting the Nicholson 32. During his time on the pontoon at the Southampton Boat Show in September 2019, he consistently told interested punters that the Nic 32 is the only boat he would entrust his life to. His outstanding seamanship skills were also rewarded with the Jim Williamson Quaich and the Seawolf Trophy for an account of a long journey. The Scottish Trophy, to be given at the now traditional lunch at the Gourock Royal Yacht Club on the Clyde, was awarded to Alison Stevens (Lizana).

We had our youngest Annual Dinner attendee to accept the Hamble Cup for an account of the most enterprising cruise. Reuben is Ben Kemp’s ten-year-old son, and a keen navigator (see page 12). As a family, they have already sailed from Scotland’s west coast out to St Kilda (see Bulletin 2019) and they have more ambitious plans too. Perhaps not a circumnavigation just yet?

While there have been suggestions that we might move our annual gathering to somewhere along the south coast, perhaps in the summer, it seems likely that we will continue to meet in the very elegant and welcoming surroundings of the Naval Club for some years to come.

Finally, a big thank you to Nick Yonge for all his work organising the evening, and to Anne-marie Coyle for volunteering
to look after the event in 2021. See you then!